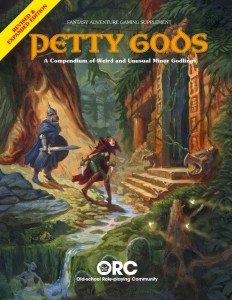 If you’re even vaguely involved in the Old-School Roleplaying scene, you’ll be aware of Petty Gods (Revised and Expanded Edition), an attempt to create something like the old Deities & Demigods, or the Judges Guild Unknown Gods from back in the day. And now, finally, it’s here!

It’s more than here, actually. It’s HERE. This thing is a monster. Three hundred. And Ninety-Four. Pages. So big that when you put it on your shelf, all your other gaming books will likely worship it. And well they should.

M.A.R. Barker is in here! James Ward is in here! Erol Otus is in here! Some of you will be freaking out right about now. These are the real old school. These are the originators. Thing is, they’re just some of the hundreds of contributors. Hundreds. Literally hundreds. The illustrations are amazing (quite a few from my friend Darcy Perry). And it’s funny! It’s a whole bunch of everything.

I’m in there too. In the introduction I attempt to define what, really, a god is. I don’t know if I succeed, but at least I got out of it with my skin intact, which is more than I can say for the poor faculty and students of the university of Crabt (Go Star Hat U!). Later on I write about The Lady of Rains, one of the aspects of The Jale God.

I don’t get to play nearly as much as I’d like to these days, but role-playing is in my blood. I’m immensely proud to be a part of such an epic project.

And you can get it free, right now, at RPG Now. And you should. But you can’t stop there. Something this epic can’t be restricted to computer bits. Lulu has a softcover version here. But for the real old-school feel, you have to go for the hardcover here. Seriously. This baby’s even got an orange spine. You know you want it.

Enjoy! And if you end up using The Lady of Rains in a game, let me know.

Footnote: I just realised. I’m sitting here wearing a Star Wars T-shirt surrounded by tiny computers. Agents of S.H.I.E.L.D is on TV and I’m writing about being in a game supplement with an orange spine. Hey, thirteen-year-old me – everything you dreamed of has come true.