Jennell Jaquays has been working on table-top RPGs and video games since the beginning. From Dungeons & Dragons, Traveller and RuneQuest to tiny indie games like Quake and Age of Empires, you’ve probably spent a lot of time in one or more of her worlds.

Jennell recently teamed up with Darcy Perry for Quack Keep, a setting for any game system that needs an injection of adventure, comedy and ducks. So many ducks.

I had the opportunity to chat with Jennell about Quack Keep, along with other projects past and future.

What’s with all the ducks?

Jennell: The Ducks. Yes. The ducks. Forty years ago, this new set of role play game rules came out from Chaosium, called Runequest. I picked up my copy at the Origins game convention in Ann Arbor, MI. The convention was a “floating convention” back then, meaning that it moved around the USA from host city to host city. That year, it was in Ann Arbor, a city near where I lived at the time.

Runequest was different. It had neither character classes, nor character levels (as games like Dungeons & Dragons and Tunnels & Trolls did). It was set in a Bronze Age world, rather than in a Medieval One. It also had anthropomorphized ducks as possible player characters. My roommate and I adopted Runequest as our game of choice (though our game group also played Advanced Dungeons & Dragons as well).

Not long after that, I joined Judges Guild as a designer, editor, and illustrator of game adventures for AD&D (first edition) and D&D as well. I was playing D&D and Runequest, but only writing D&D.

or Judges Guild was Dark Tower. A war between Law and Chaos with an Egyptian theme, set in a pair of buried towers. That adventure came out in 1979. Later that year (I only worked for Judges Guild for a single year), Judges Guild obtained the license to publish adventures based on Runequest as well. I wrote (and illustrated) two adventures for it. One was not about ducks. But the other… well I thought it would be fun to do a pastiche on the cover of Dark Tower. I replaced all the characters (including the statue of Set… though it’s really Anubis, not Set) with duck versions. The adventure itself was serious, but the cover was not. And I didn’t even finish it. I left Judges Guild under my own power (that is, I resigned) at the end of my first year there.

But because of that adventure (an

d perhaps a cover that I did for Chaosium’s house publication, Wyrm’s Footnotes), I became known as the designer/artist who did ducks. Most of my work has NOT been about ducks. But the association has been firmly affixed in gamers’ minds ever since.

I backed Darcy’s third Kickstarter. I liked some of the figures he had sculpted in

it. And then he showed his Duck Knight figure, and I knew I had to have that one two. And I shared the kickstarter with friends and fans (who I also knew liked ducks). And THAT led to Darcy creating a tribute ch

aracter for me in Kickstarter, Jenn Jaquack the Shield Maiden. By the end, he had included four ducks in the project… and apparently enjoyed sculpting them so much that he wanted to do more.

We began chatting about it, and he suggested a collaboration. He would sculpt ducks, and I would write an adventure around them. He had several figures in mind that he already wanted to create, and I suggested some that I thought would be fun. We drew heavily from our own fannish appreciation of both classic fantasy literature (Eldritch, Coduck the Barbarian, the Grey Moulter, Froduck) and popular entertainment (The Ducktor, Katnip Everquack, the Quack Knight, Wanda Duck). A few were completely original (Mother Henna, Dabbler Green, and Goodie Green). We ran out of space and time in the Kickstarter before we ran out of ideas.

Were there any challenges working with a collaborator on the other side of the world?
Jennell: Probably the biggest challenge was learning each other’s’ wake/sleep/available schedules for when we needed real time interaction with each other. Once that was handled, the rest was all a matter of course. 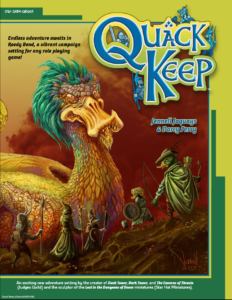 Reading Quack Keep, the characters and potential stories seem to leap off the page. Was there anything about this project that created such a feeling of vibrancy?
Jennell: I can think of several things that may have contributed to that. One is writing for what in many ways amounts to cartoon characters. That side step from the familiar can be quite freeing. It allowed me to be a bit broader in characterization than I might normally write. Another was that so many of the characters have their roots in pastiches (or even parodies) of characters from popular fiction, media, and culture. We began with ideas for takes on popular characters from fantasy fiction, then moved on into television, motion pictures, and even reality TV shows.
Another was, and this is a slight poke at my collaborator, Darcy didn’t really think about the personalities or backstories of the characters that he was sculpting. He made them interesting visually, but without any thought towards them sharing the same world together, let alone the same neighborhood.

We allowed characters to change and develop as the book content grew. You can probably tell how much I became invested in a character by the depth of their backstory.

Occasionally, some characters pretty much added themselves to fill needs in the world. Howie the Human was one of those. He’s one of two human(-ish) characters in the setting that’s mostly birds. Hopefully, both the initial parody and the one that it developed into (a play on another person named Howard) comes through and is fun to play with. Putting the characters together sparked stories based on their potential interactions.

Even now, as I’m getting back into my hobby painting (and miniature customization) I’m creating new characters that could be in the setting. One of the Reaper Bones figures in my collection of “to be painted” figures has a bit of a Puritanical look to his costume and demeanor. I had a duplicate, so I’m converting one into yet another member of the Fowl Folk, Suleiman Krane, a tall, gaunt, dour fowl saved from damnation by his faith, but condemned to search out evil in the world and destroy it.

2017 was a biggest sales year for Dungeons & Dragons at least since the acquisition by Wizards and possibly ever. Do you think this new mainstream acceptance of D&D has extended to other RPGs as well? What do you think the future holds for RPGs?

Jennell: If I’ve learned one thing after 40 years in this business is that it is cyclical. We’re in an upswing right now, revitalized by a set of rules that are modern, but capture the feel of the original. At the same time, people who were kids and young adults in the 70s and 80s are rediscovering their former pastime and creating a market for Old School Revival products. And of course, some of the most successful Kickstarter campaigns in recent years are for high quality board games, often with a D&D or RPG feel to them (and often with amazing game miniatures as well).

I think the future continues to bode well for RPGs. We’ve already seen the rise, and then subsidence of online RPGs which simulated some of what could be done on tabletop but failed to provide the variety of experiences possible with tabletop gaming. With the addition of well-produced, high profile social media ‘casts on Twitch and YouTube, we’re seeing new audiences being brought into gaming virally. I expect an eventual downswing, but hopefully not at the level of crashes that followed the d20 explosion years back.

Now that Quack Keep is put to bed, what’s next?
Jennell: I have an illustration project that I’m a bit behind on, several decks of cards that are compatible with that popular fill-in-the-blank social card game that I produced for a speakers group that I’m a part of that we use as teaching aids about transgender issues, particularly where they intersect with games. And then I decide whether I dive into continuing development on both the game world which I set my D20 game adventures in and the next game adventure (one of several that I have in development) or jump into development for a relaunch of my Central Casting character history books, or just do what I normally do, which is work on all of them at the same time.

Quack Keep is available at Drive Thru RPG
Miniatures, including plenty of ducks, are available at Star Hat Miniatures. The next Star Hat Kickstarter will be kicking off in a few days.